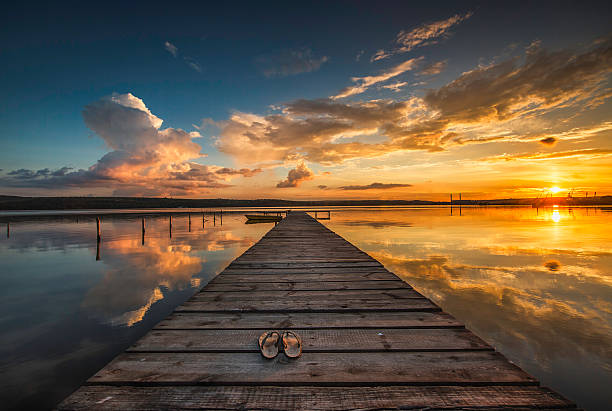 A Monthly Letter from the founders

The home stretch of 2022 is in sight, as the first month of Q4 is in the history books. Moving into the holiday season, there is much to be thankful for looking back, and much to anticipate as we look ahead.

In the world of retail and consumer based industries, sales activity never fails to spike at the end of each year. This is not solely due to the increased shopping that happens for gift giving and such, but also due to aggressive marketing and discounting by businesses. Peak season always brings a perfectly condensed stint of high volume consumer activity, running in parallel to retailers’ desire to clear out old inventory and firm up their year end bookkeeping.

Having owned an e-commerce delivery business for the last decade, I’ve had front row seats to watch the evolution of e-commerce fulfillment; this experience drove the inception of PackagePortal back in 2019. Now here we stand at my 10th  peak season in this space, preparing to enter 2023, and I believe that now, more than ever, the industry is readying itself for Web3 integration.

Those of us in this space know without a shadow of doubt, that blockchain is the future of commerce & finance. And those of you reading here today, believe that PackagePortal has a viable service that can fill a gaping hole in the delivery experience for consumers and companies alike. But until now, the industry as a whole has not been ready for a solution like ours, or any others like it, as “crypto” has remained a black sheep in the broader markets. However, during this current bear cycle, advancements in the tech and institutional education has leapt ahead, paving the way for global adoption, with the likes of BlackRock and Central Banks dipping their toes in the pool and drinking the Web3 water. While the lack of regulatory clarity is still present, it’s beginning to dissipate to the degree that market participants can see glimmers of a bright future built upon blockchain.

And PackagePortal is perfectly positioned to capture sizable market share in a number of verticals, as the services we’ve built are integrated with various partners. For much of the year, dialogue had been bleak, as Stocks & Crypto bled out among fears of recession, with Russian provocation inflaming the energy crises across Europe. These variables made raising capital and onboarding clientele extremely difficult for startups, particularly those within the fringe Web3 space. But October brought in cooler air, and cooler heads, as decision makers are beginning to wade back into the waters…deploying capital and signing deals, as economic fears also begin to cool off.

Conversations as of late have improved. We are seeing a renewed interest by Venture Capitalists and prospective  partners, and we are pursuing a number of new leads. The rest of the year will see us continuing to expand our sales efforts, and focus our energies exclusively on partnerships, as the time feels riper than ever. With retailers across the globe aggressively pursuing consumer engagement to stifle off competitors and maximize year end profits, there is a greater appetite for risk in gaining an edge over competition, by employing new tech & new methodologies. The gloves are off, so to speak, and merchants are more apt to try new things. We intend to capitalize on the momentum these next 8 weeks will bring, and share the outcome as we enter the new year.

We are doing extensive dives into two newer chains: APTOS and SUI. Research is ongoing to gauge the viability of migration to the L1 platform that has the technical features required, and the social trajectory desired, to nurture PackagePortal with the proper conditions for growth.

Our codebase has been migrated to a WebApp, allowing PackagePortal to function on any mobile device’s web browser, without the need to install a mobile app. And an invasive move by Apple in October, makes an unnecessary app even more undesirable. As such, we intend to delist the mobile app sometime soon, as mentioned in previous newsletters. We will share announcements when that time comes, but want to reassure our community ahead of time, again..that the move to delist the mobile app is planned, since it’s simply no longer needed. Some of the extra benefit gained is that we’re able to break free and detach ourselves from Appstore oversight and negative reviews, allowing the service to shine for what it is, rather than be dimmed by overzealous gatekeepers and slandered by disgruntled traders.

As a reminder, The Dock staking contract with 19% APY will be terminated at the end of the year. The 90 day unbonding penalty will be removed on Dec 31, allowing free and instant withdrawal thereafter. This means only 2 months left to stake with that rate. The Buoy staking contract will continue on without change. 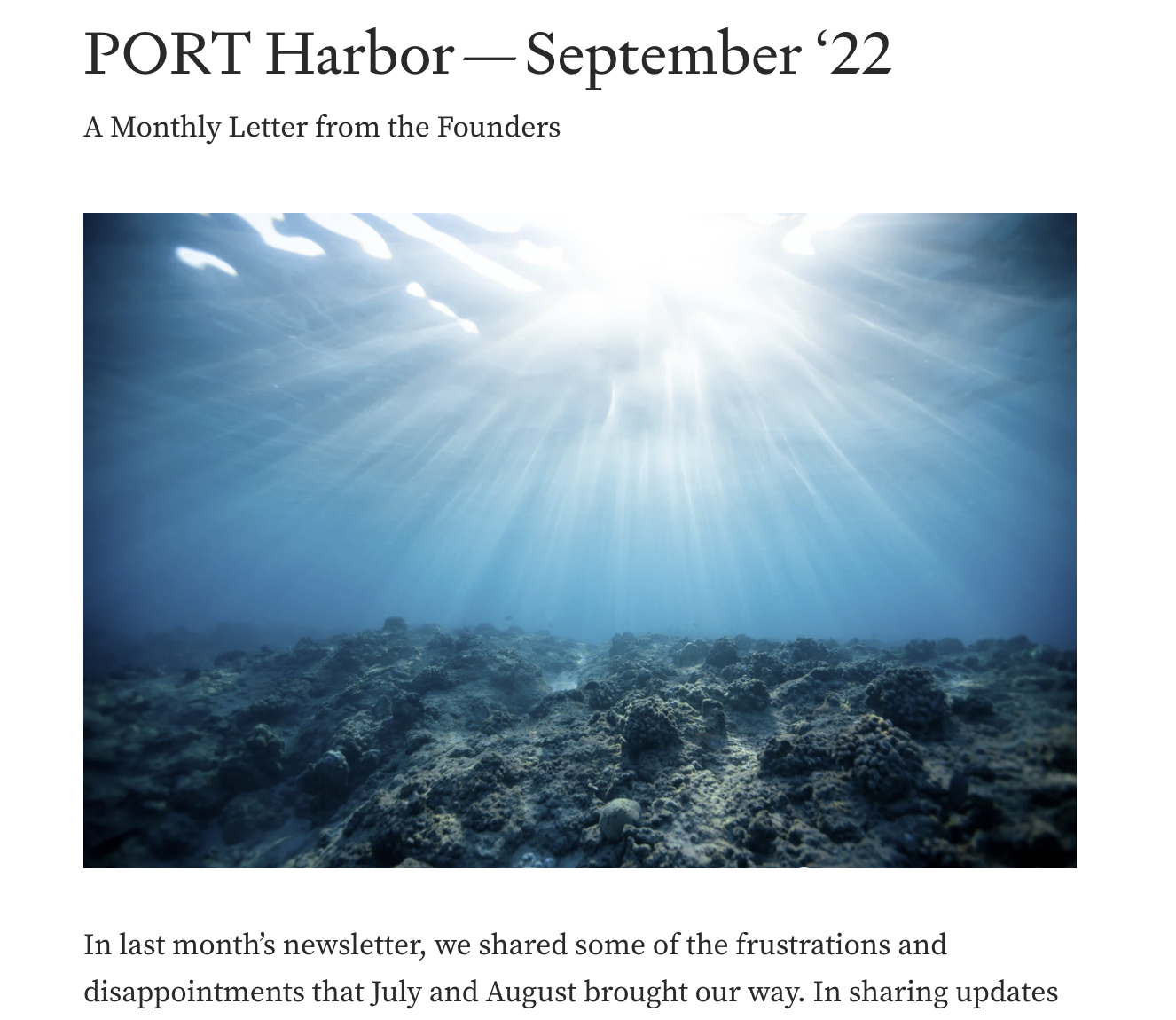 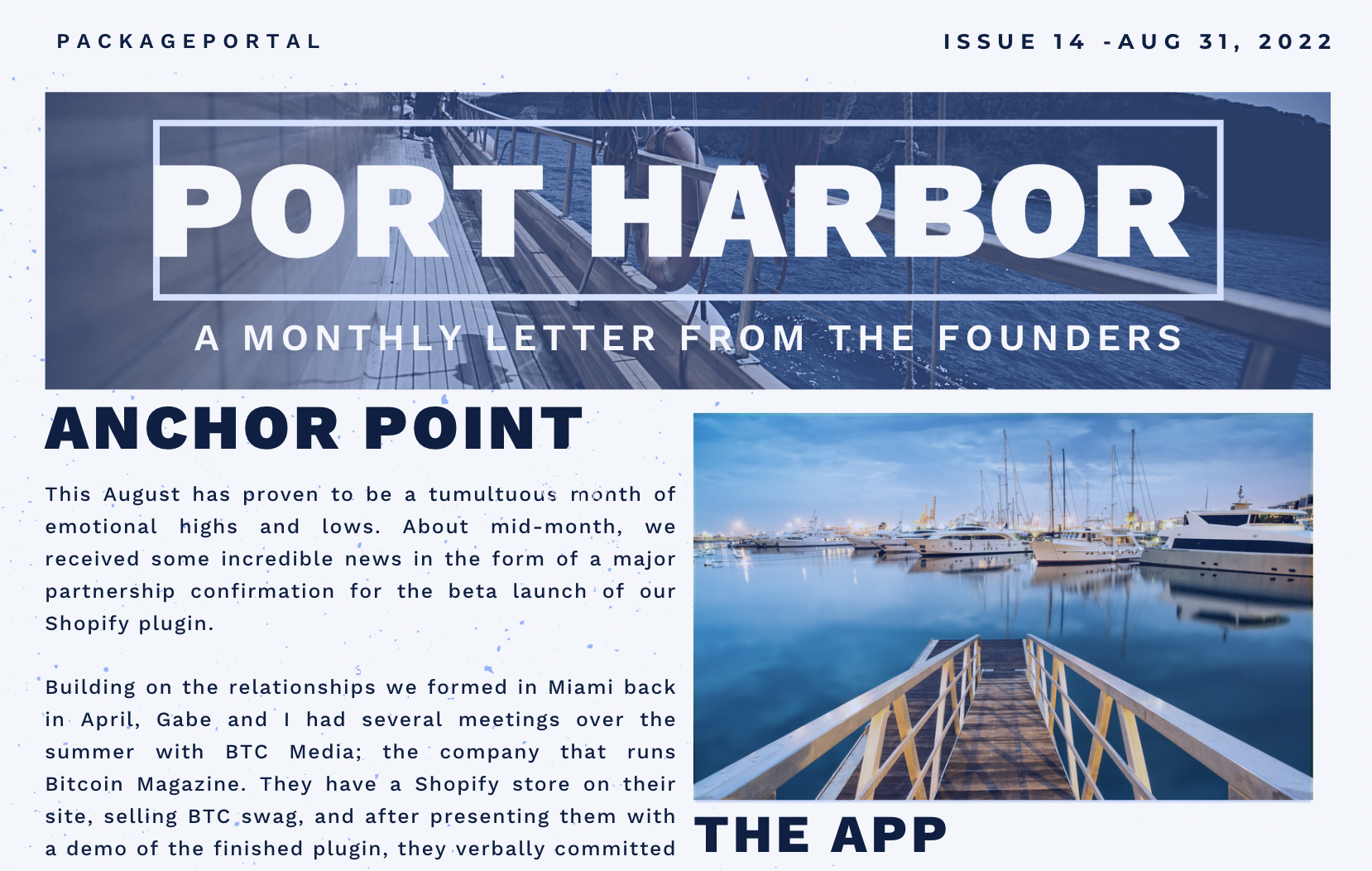